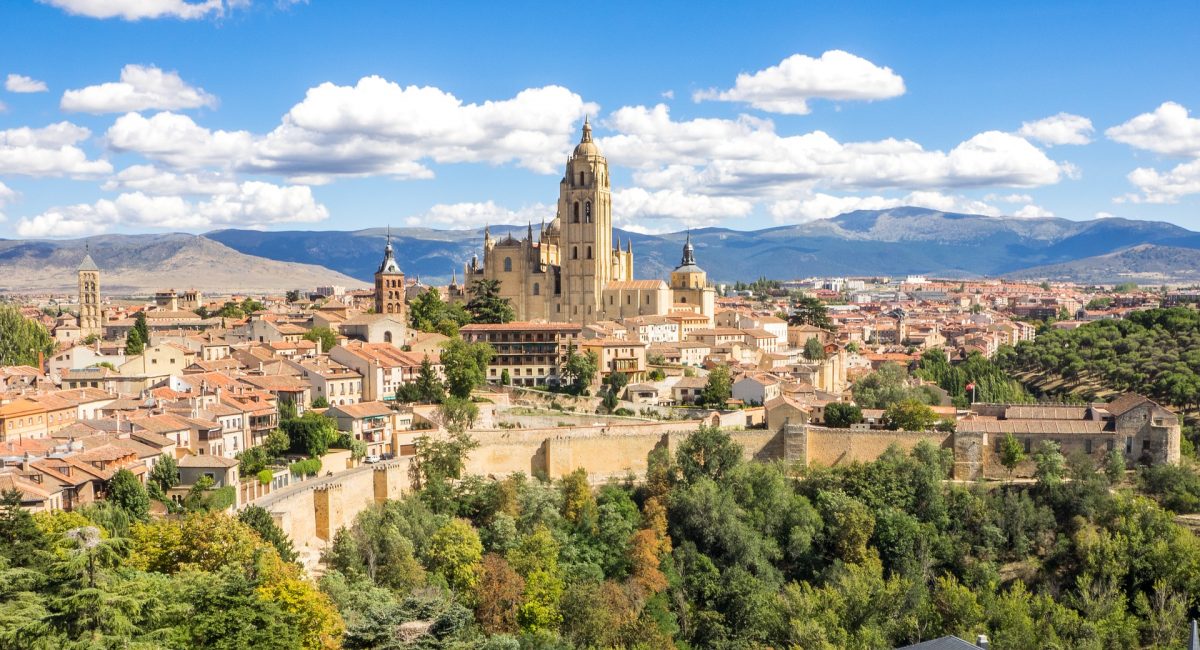 Declared by UNESCO as a World Heritage Site, Segovia is a picturesque city appealing for its historic charm and romantic halo. Like most cities in Castilla y León region, Segovia counts with interesting architecture, history and Spanish culture and of course gourmet experiences, all at only a 30 minutes journey from Madrid.

This guide will give you some notions of the main sights to see and things to do during a day exploring Segovia. What are you waiting for?

A bit of history 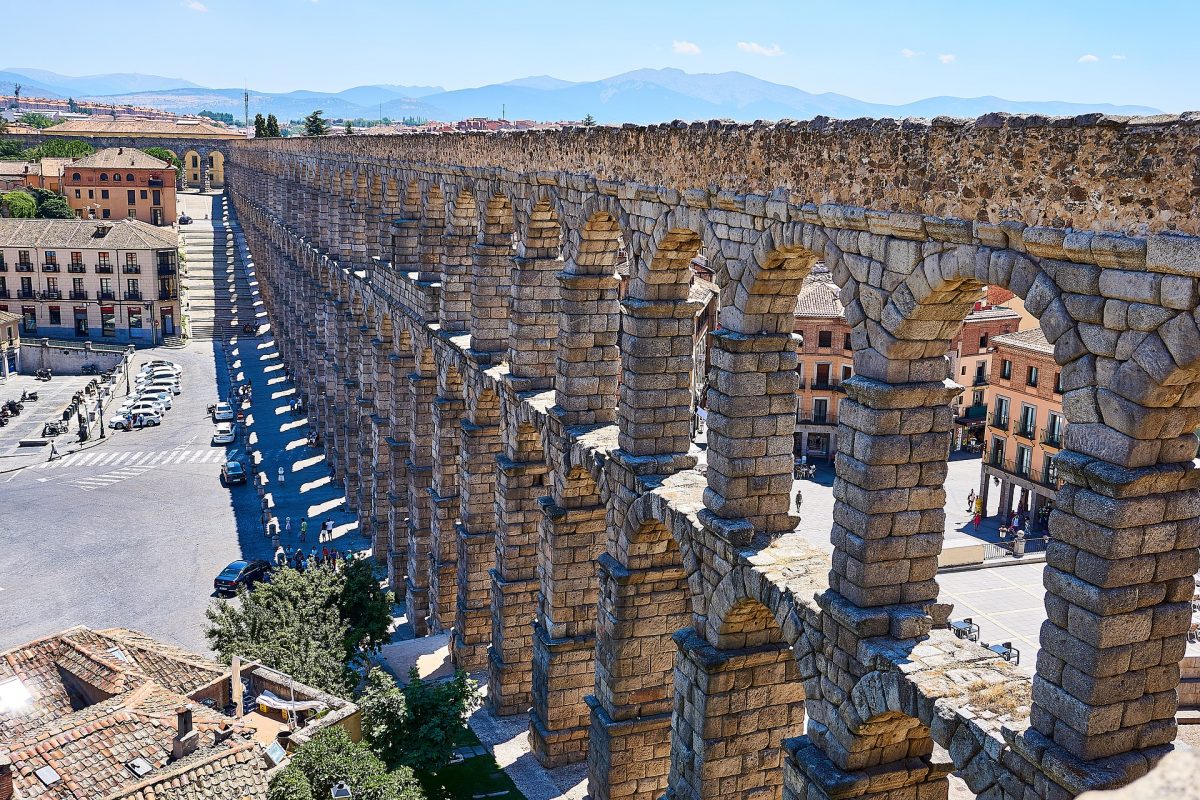 Beautiful Segovia is full of history around every turn. Most famous for its huge Roman aqueduct, impressive fairy tale style Castle and imposing Gothic Cathedral, these symbols are remnants of a fascinating past in what is now a thriving, vibrant city.

The city population has seen periods of both boom and decline throughout history. It’s been attacked numerous times and resettled by Celtic, Roman, Moorish and Spanish occupation.

A textile and wool trade sustained it until the 18th Century and nowadays, it’s a cosy city that offers tourists from around the world the opportunity to imagine what life was like in the city and enjoy the historic food and culture.

Also In 1985 both the Old City and its Roman Aqueduct were given UNESCO World Heritage Site status.

Getting there from Madrid 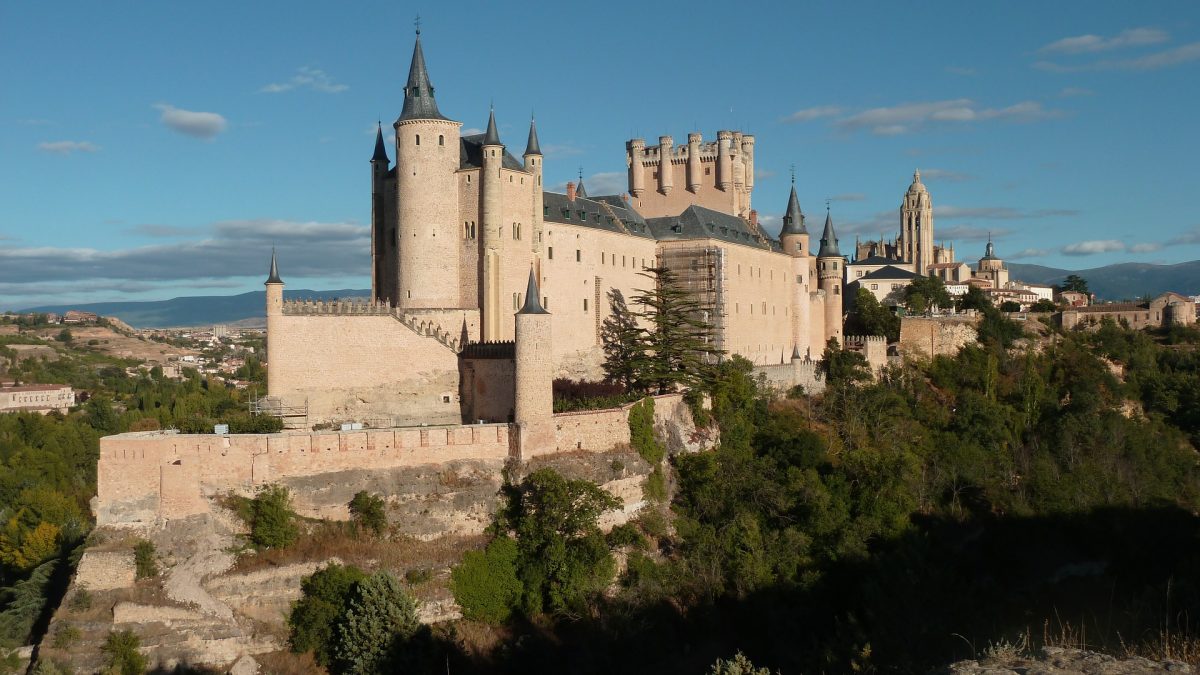 Segovia is close enough to Madrid for a comfortable day trip from the capital of Spain. You can get there by car easily in about 70 minutes.

However, we strongly recommend you to travel by public transport from Madrid, as you won’t have to worry about parking and you can choose among several and frequent options:

By bus: The most economical option. A 65 minutes journey from Madrid Príncipe Pío Station.

By train: A 30 minutes journey on the high-speed AVE train from Madrid’s Chamartín Station.

If you are staying in one of our central Apartments in the heart of Madrid, you can get easily to any of these stations, by subway or bus. 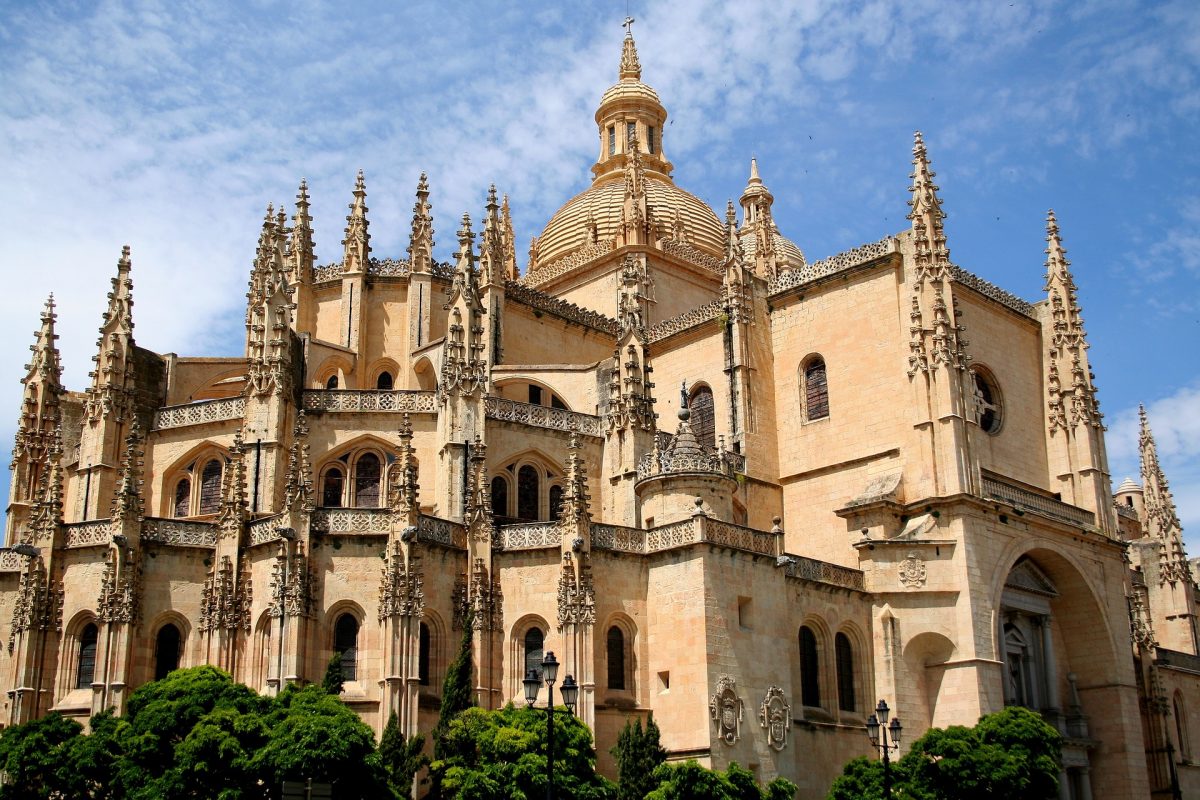 Roman Aqueduct: This is one of the most spectacular legacies of the Roman Empire in Spain. It is made up of 166 arches spanning more than 17 kilometres of the aqueduct, which once transported water from the Acebeda River to the Alcázar. You can visit this structure for free all year round.

Segovia Cathedral: This spectacular gothic temple is known for being located at the highest point of the Old Town. Starting in 1525, it marks the boundaries between the Plaza Mayor and the Old Jewish Quarter. The impressive cathedral also looks over some breathtaking views of the entire city. The entrance costs 3€ but you have to pay extra if you are willing to go up to the bell tower.

The Alcázar: This stunning castle, rumoured to have inspired Disney films’ castle, dates back to the 12th century and once served as a residence for King Alfonso VIII. Today it is a fairy tale scenario, set up high on top of a hill and surrounded by castle walls. It displays important artefacts from its yesteryears and is open to tourists at an 9€ price.

Jewish Quarter: Take a walk around the charming streets of the city’s old “Judería” or Jewish Quarter and these cobbled streets will take you back centuries of Jewish history in Spain.

What to do in Segovia

In addition to spectacular sights, Segovia is also well known as one of the best day trips for foodies. Also, no visit to Segovia would be complete without a taste of its famous roasted suckling pig or “cochinillo”. This is one of Spain’s top must-try regional delicacies: this tender and succulent pig. The Segovia version of the dish is theatrically sliced in front of you using a plate to show just how soft the meat is, knives are not needed here!

Don’t miss the chance to try this delicacy at Mesón Cándido, the most well-known restaurant in town and truly a monument to regional cuisine. Its history and tradition date back to the 15th-century house that has been converted into a typical Segovian inn

Are you in need of more inspiration to keep discovering great spots near the city? Don’t miss our previous blog post and discover the Best day trips from Madrid. 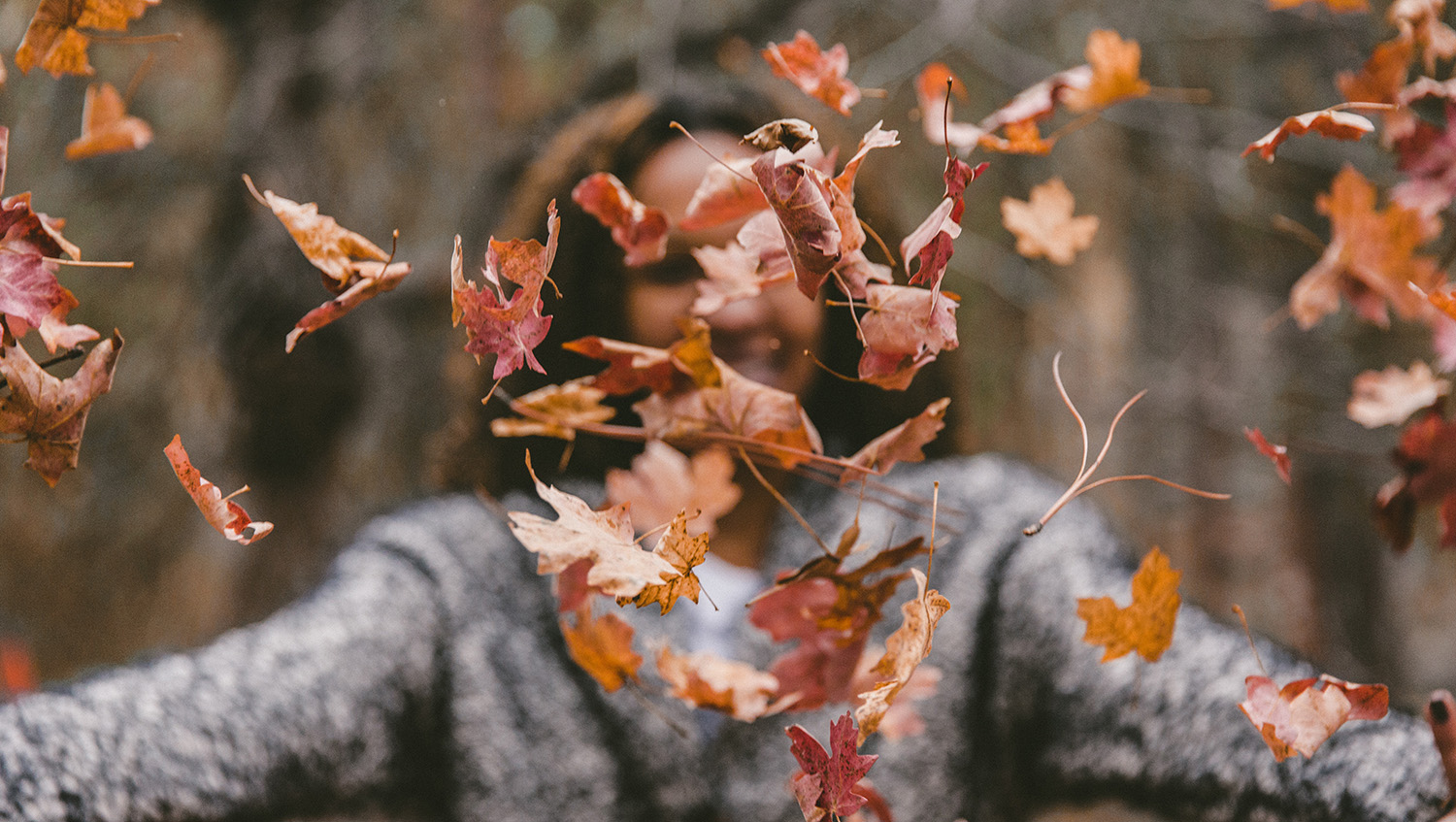 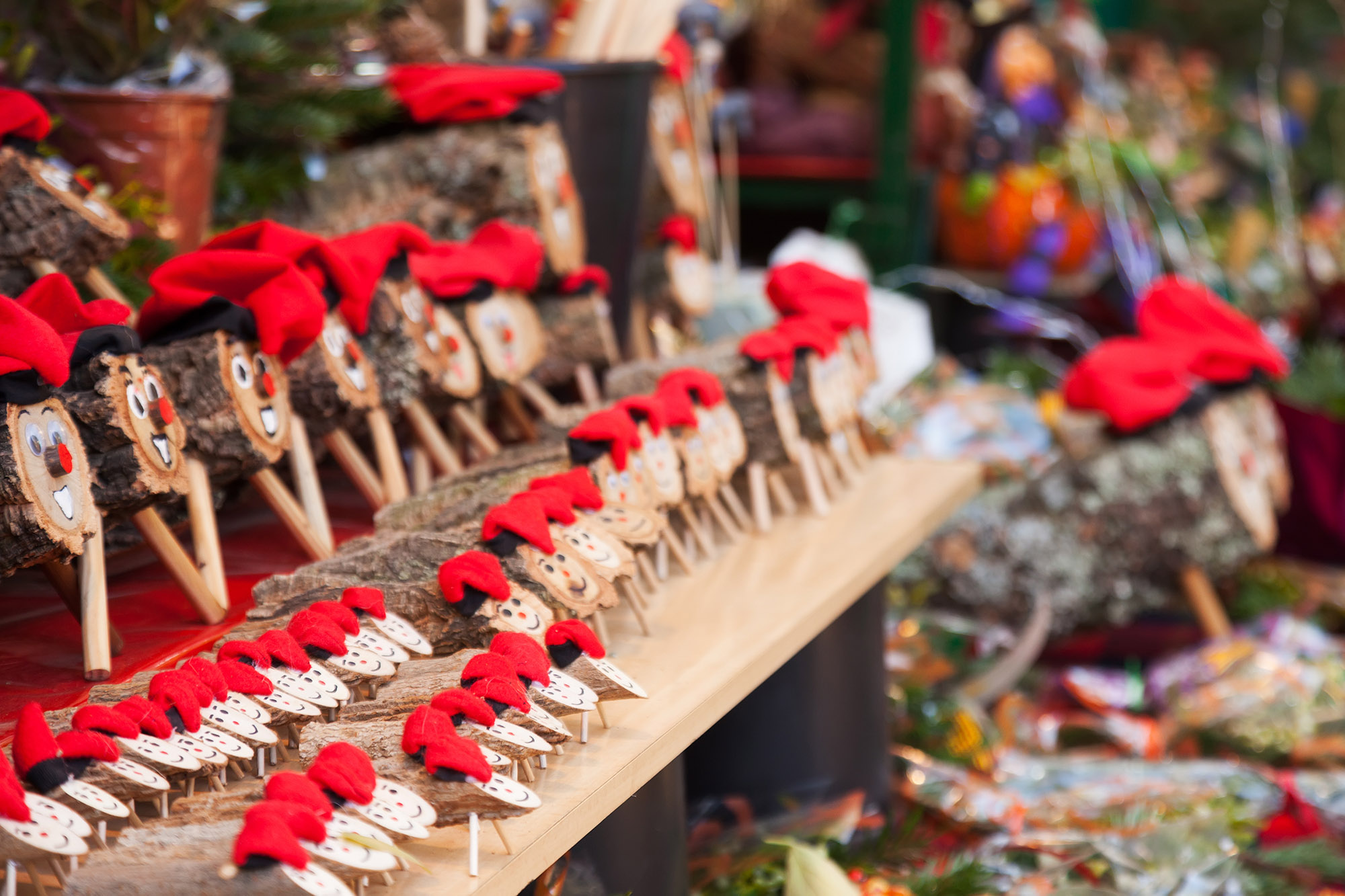