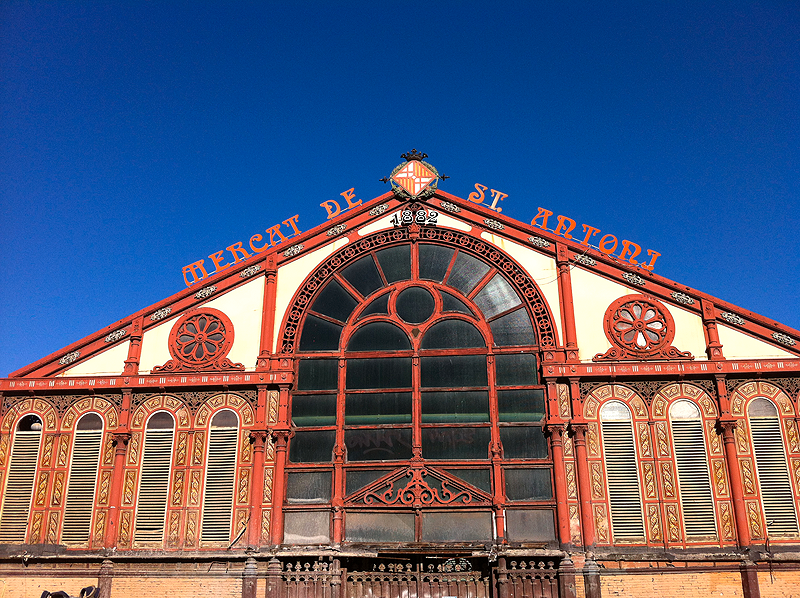 Eixample is a central neighborhood of Barcelona.Its name translated literally means extension, as that is exactly what it is.It is an extension of the original Barcelona. Izquierda is the Spanish word for left so Eixample Izquierda or Eixample Esquerra as it is known in Catalan simply means the left hand side of this area.
Eixample Esquerra has everything you need.There are landmarks such as Casa Golferichs, Parc de Joan Miró and the historic Barcelona University building.You can also find two popular food markets,The Mecat Sant Antoni and The Mercat del Ninot.These markets are very appreciated by the Catalans who make their daily shopping there.

These traditional markets offer many different stalls from groceries, meat and fish, to household goods, clothes, lingerie, bags, gifts and knickknacks. On Sundays, second-hand books and stamps for collectors captivate the visitors to the historic Mercat de Sant Antoni which retains the architecture, vibrancy and charm of its origins.These places give vibrancy and inject life into the Eixample Esquerra neighborhood.

Parc de Joan Miró is a large park with lots of open space .It is also known as the Parc l’Escorxador (so named because it stands on the site of the old municipal slaughterhouse: escorxador in Catalan).The park is used by visitors and locals from Barcelona’s Eixample Esquerra neighborhood to relax. Parc de Joan Miró is located at the south-west end of the neighborhood and is the perfect appetiser before you begin exploring the monumental Plaça Espanya.It the park there is a 22-metre-high monumental sculpture Donai Ocell (Woman and Bird) made by the Barcelona-born artist Joan Miró.The sculpture is one of Barcelona’s iconic artistic landmarks.There is also a public library on the other side of the park, which is named after Joan Miró.

It may not have the more popular sights and attractions of the right hand side, but Eixample Esquerra has its fair share of vibrancy and charm!